Quenchers can absorb energy that is dissipated by a fluorophore and emit it either as light of a longer wavelength (FRET quenching) or as heat.
The most commonly used quenchers are Dabcyl (4,4-Dimethylaminoazobenzene-4-carboxylic acid) and Tamra, a fluorescent dye. According to the fact that Tamra is a fluorophore by itself, it can be cause of high background fluorescence. Increasingly, therefore non-fluorescent quencher, so-called Dark Quenchers, have established.
In contrast, Dark Quenchers are molecules that can absorb energy emitted by fluorophores without showing any fluorescence by themselves.

Figure 1: Comparison of amplification curves (normalized) of a qPCR assay with 5'-6-Fam-labeled probes and four different 3'-quenchers. In each assay, the same primer and probe sequences were used. All assays were run in duplicate (Genaxxon ProbeMasterMix No ROX, MyGo Pro, pre-calibrated channel for Fam). In direct comparison, the quenchers (BMN-Q535, BMN-Q620, BHQ-1 and TQ2) show almost identical results with the fluorescence dye 6-Fam.


It is important that fluorophore and quencher are compatible with each other. The individual quenchers offered by biomers.net differ in their absorption maxima. The quenching efficiency of the quencher peaks in its absorption maximum. Therefore one can and should select the appropriate quencher for a certain dye.

biomers.net offers a range of quenchers covering the largest part of our dye range: 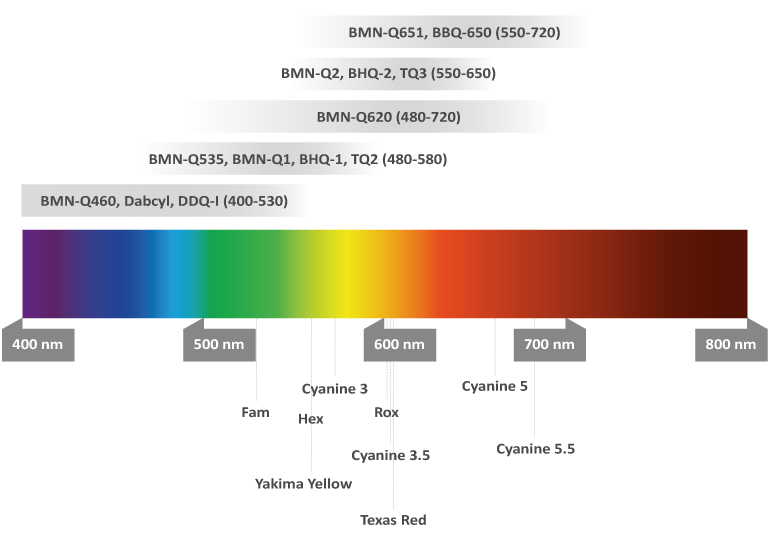 Tide Quencher (TQ2, TQ3): Tide Quenchers (TQ) were designed and developed by AAT Bioquest and are license-free. These quenchers show a similarly good efficiency as Black Hole Quenchers. TQ2 (absorption maximum at 515 nm) fits quite perfect to 6-Fam and is also suitable for Sima, Hex, Tet and Joe.
TQ3 (absorption maximum at 570 nm) is highly compatible for quenching dyes like Cyanine 3 (Cy3) and Tamra, but also shows quenching activity in the longer wave area for Rox, Texas Red, California Red and Cyanine 3.5 (Cy3.5).

Deep Dark Quencher (DDQ I, DDQ II): DDQ I and DDQ II were developed by the group of Tom Brown, Southampton and are license-free. Based on Methyl Red, DDQ I has an absorption maximum at about 470 nm. The other one, DDQ II, is based on Disperse Blue 3 and shows an absorption maximum at about 650 nm.
Please note the modification DDQ II has been discontinued; it will be sold while stocks last. As an alternative to DDQ II, the biomers.net Quencher BMN-Q620 can be used.